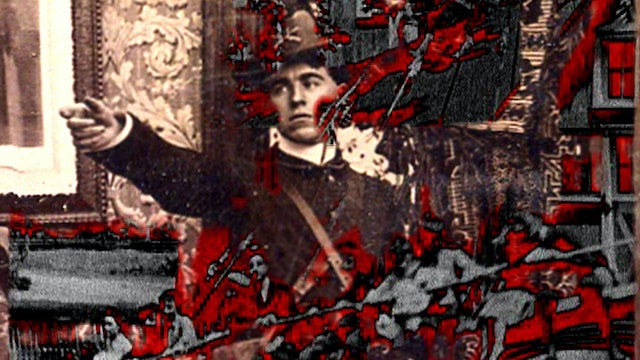 In Jacobs’s words—“Razzle Dazzle is an early Edison shot cut off at its head and tail and along its four sides from the continuity of events like any camera-shot from a bygone day; no, like any camera-shot, immediately producing an abstraction. This abstraction pictures a great spinning maypole-like device lined with young passengers dipping and lifting as it circles through space. They look out—from their place at the start of the 20th century—with a remarkable variety of expressions, giddy to pensive. We observe them but of course they see nothing of this, our America, hopelessly gone to rot, its mountaintops leveled for extraction of coal, rivers and air polluted, crisscrossed everywhere with property-lines; they don't see its prisons or the corporations leaning in from their off-shore tax-bases to see what more they can take. Early stereopticon images also appear, digitally manipulated to reveal their depths. A digital shadow falls upon the scene and yet, grim as things get, as our crimes and failures then and now commingle, the movie proceeds with a cubist/abstract-expressionist zest.”